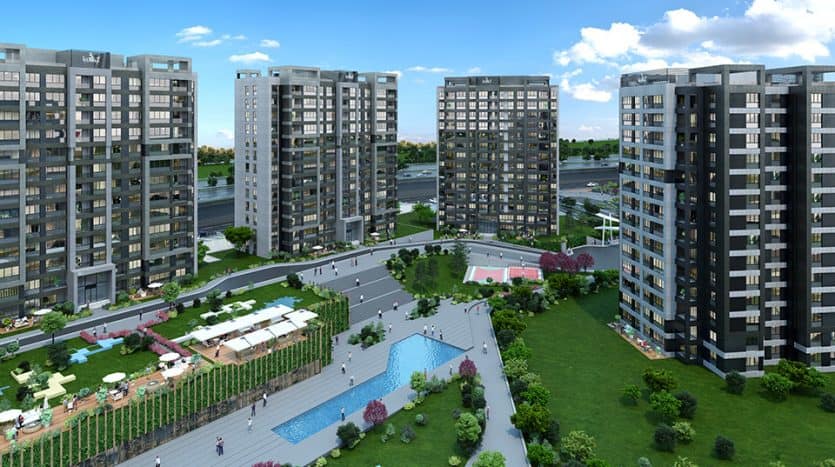 A housing project suitable for investment and Turkish citizenship, with the Turkish Government guarantee. It is considered one of the most prominent Istanbul projects located in the residential area of ​​Basaksehir. The project consists of apartments, shops, and a hotel. The project is in partnership with the municipality of Basaksehir

Basaksehir Area
A modern and quiet area with many green areas, artificial lakes and forests such as Shamlar forest and others. It is located between TEM International Road from the south, the third airport from the north, Basin Express Road from the east, Bahcesehir and Arnavutkoy from the west. Many mega projects are being built on it

Botanica Garden, the largest botanical garden in Europe. Kent Square, which is the largest square in Istanbul, with an area of ​​60,000 square meters, and it has a mosque that can accommodate 5,000 worshipers. A government university will soon open in it and now it has many private universities, such as the famous Ibn Khaldun University, and it has many Turkish, Arab and international schools.

It has many picturesque areas, forests and lakes, such as Water Valley Park, Basaksehir Park and Shamlar Forest

It has Mall of Istanbul, the most famous and largest mall in Turkey, which needs more than a day to visit. Where it contains approximately 375 shops, Maui amusement park (the largest indoor amusement park in Europe) and has a cinema complex that is considered the largest in the world and won several international and local awards

The project consists of residential units, shops and a hotel near it. The project offers residential apartments in addition to 209 shops surrounding the residential area, and these features all increase the investment value of the projec.

The project is distinguished primarily by its location within the most investment areas in Istanbul, the Basaksehir area, as it is witnessing the opening of the largest government projects such as the medical city that ranks the largest in Europe and the third in the world, as well as the largest botanical garden in Europe in addition to the Basaksehir Square, whose area is nearly twice as large Taksim Square area, and the project is surrounded by two metro stations that will start work in the next few months, and it is considered one of the closest projects to Istanbul’s new airport.

It is located close to the main axes of the city, trade centers and residential neighborhoods, with easy access to public transport, metro, trams and public transportation .. It is also located in the middle between Ataturk Airport and the new third airport.

Cash Only.
If you are looking for an apartment in this project, please feel free to contact us.

New Project in Beylikduzu for Lovers of Tranquility and Spacious Areas

The project is located in the Beylikdüzü area within the…

A new residential project in the Atakent district of Istanbul,…

Apartments for sale in Nisantasi Istanbul within a residential project that is the first of its kind in the region and in Istanbul .

Nisantasi is located in the center of Istanbul, near the…

Where you can experience the neighborhood culture that offers you…